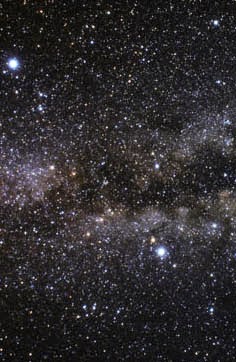 Like many Chicagoans of my generation, I grew up watching old science fiction movies after school. Invariably, the character playing a scientist offered up an explanation for whatever tragedy threatened to befall humanity. Usually this came in the form of a ravaging monster, and the explanation generally involved mutation caused by radiation.

Like a child, I always bought the explanation. Of course, at the time I was a child. Recently I encountered a book description in which the hero was the richest man in the galaxy. “Really?” I thought. “There are an estimated 200 billion stars in our galaxy. How could anyone determine who its richest man is? Sounds like bad science to me.”

Putting galaxies to extravagant uses is not unique to this book. Other examples abound. Like the movie, Interstellar, for example. Its story has astronauts taking a wormhole ride to another galaxy in search of a habitable planet.

I can’t understand why. Our galaxy is thought to be 100,000 light-years across. Given so much space there should be a habitable planet right here in the Milky Way. Some speculate that the nearest one could be just 13 light-years away. So why travel so far?

Apparently they decided to go to another galaxy so they could use a wormhole conveniently located near Saturn. But how do they know the wormhole leads to another galaxy? What’s to stop it from leading to a different location in our galaxy, or to another universe altogether? And if they knew they were going to another galaxy, why didn't they name the movie Intergalactic instead of Interstellar?

Like with other science fiction movies, a scientist offered an explanation. The scientist is theoretical physicist, Kip Thorne. He was instrumental in modeling the appearance of the movie’s black hole. Despite his efforts, I don’t buy the premise. To me it’s just plain stupid to go looking for a place to live in another galaxy when there’s plenty of nice real estate closer by. And that’s why I won’t be seeing Interstellar.
Posted by Dave Loeff at 9:40 PM No comments: