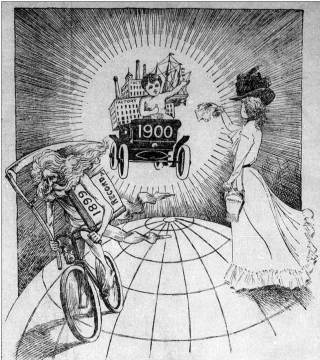 Although a new year is upon us let us not forget some noteworthy titles from 1899. Consider these two non-fiction titles: The first is from, a relatively unknown Norwegian-Ameircan Minnesotan, Thorstein Veblen. He published a radically new theory drawing upon sociology as well as economics. He calls it, “The Theory of the Leisure Class: An Economic Study of Institutions ”.

A new historical account about the Boer War of 1881 was published by popular fiction writer, H. Rider Haggard. Additionally, his popular novel written several years ago, “She: A History of Adventure” has been captured for the new visual media, cinema, thanks to the illusionist, Georges Méliès.

In addition to non-fiction, the final year of the century had its notable fiction. “To Have and to Hold” by Mary Johnston will be a best seller in the first year of the twentieth century. Kate Chopin’s “The Awakening” promises to be well received in the future as well.

Those who like Haggard’s adventurous fantasies are probably also familiar with the name H. G. Wells. He, too, published a new title in 1899, “When the Sleeper Wakes”. The novel tells of a sleepless man who finally finds slumber only to waken more than two hundred years later. Thanks to an investment on his behalf, the sleeper is now the wealthiest man in world. Without revealing any spoilers, I’d like to mention that the Wells will issue a revision in 1910. By that time Wells, will have published another 11 novels. That may matter now, but it won’t by the year 2000. In that future, Wells will largely be known for only three novels, “The Time Machine”, “The Invisible Man”, and “War of the Worlds”. All three were published prior to 1899.