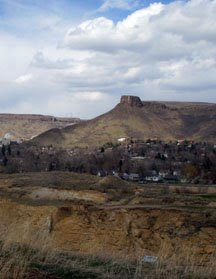 If you’re in the area, pay a visit to Golden. Situated between high mountains and grassy plains, Golden is a new-fangled town with old-timey roots.

Traveling west from Denver along Highway Six (also known as 6th Avenue), you’ll pass the Jefferson County courthouse. Not far beyond, 19th Street will take you into downtown Golden.

But don’t go there just yet, because 6th and 19th is a very interesting intersection. If you take a left here, 19th will put you on Lookout Mountain Road (also known as Lariat Loop Road). If you’ve always wanted to drive your own roller coaster, this is the road for you. On the other hand, Gringo, there are easier ways to get into the mountains. 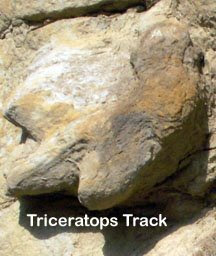 But, you came to look at dinosaur tracks, so take a right, rather than a left, on 19th Street. Turn right once more on Jones Road, just before the car dealership. Triceratops Trail begins parallel to 6th Avenue and looks down upon Fossil Trace Golf Course.

It’s a short trail, about half a mile, steep in spots, but not too steep. The deep trenches along the trail once contained clay before it was quarried. What remains is sandstone—sandstone containing impressions of triceratops traffic and ancient plant life. These impressions are known as trace fossils. Fossils of bones or other body parts are called body fossils. In addition to triceratops footprints, fossils of palm fronds and animal tracks can be seen.

Posted by Dave Loeff at 3:03 PM No comments: