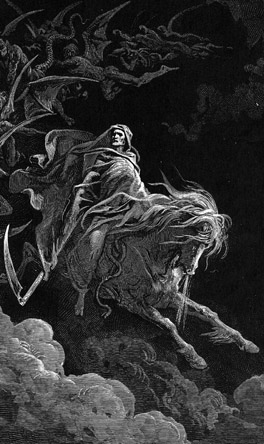 I find no humor in society's increasing polarization of beliefs and attitudes, in the absence of dialog between left and right, religious and secular, rich and poor. Envisioning Heaven and Hell populated by rigid thinking, bureaucratic zealots simply doesn't amuse me. The world is full of such people already and their numbers are steadily increasing. Maybe Armageddon is coming after all, and that's just not funny.
Posted by Dave Loeff at 8:25 PM No comments:

Kai and Ceire died before revealing their secret. A generation later, the Tea Goddess sends Remy a book—a book that profoundly affects his future. Soon he’s running for his life without knowing why.

Soon he’ll learn about his karmic debt and will need to repay it. But in order to do that, he’ll need to survive.

In this brief novel, few words are wasted. It takes off like a shot and races to its conclusion with just enough character development and world creation to make it believable. Personal dilemmas and violent action keep the tension high until the end. That end brings peace to several of the characters, but torment to another.

The book length of 156 pages is somewhat misleading since there’s a lot of white space throughout (I read the Kindle edition). Although not necessary, readers will take a bit more from this book if they have some familiarity with Chinese Buddhism.
Posted by Dave Loeff at 1:36 PM No comments:

Rise of Magic. Death of Science.

Fast Company devotes two pages of its February issue to Charles Darwin, who will turn 200 on the twelfth of that month. Francis Collins, whose comment is one of nine, remarks that when Darwin published, On the Origen of Species, 150 years ago, many accepted his theory as an explanation for how God carried out creation.

Today many people accept evolution, or at least aspects of it, as compatible with their religious beliefs. But some do not. Evolution requires a much longer time frame than the Bible’s mere seven days of creation. Some religious people argue that we can’t know the length of God’s day. It might span the eons needed to make evolution work. These are people who view Biblical truth as figurative, rather than as literal truth.

There are others who believe that the Bible means exactly what it says. There’s no wiggle room for scenarios spanning millions and billions of years. Everything came into being during the last ten thousand years or less. If the time since creation is so short, evolution is false and so are geology and physics.

My watch synchronizes its time with the atomic clock in Boulder, Colorado. The atomic clock is based on the dependability of radioactive decay. But the whole idea of radioactive decay is based on a timeline that far exceeds the time accounted for by a literal interpretation of Biblical creation. Those who accept this timeline must necessarily reject much of modern physics.

I believe that religious truth is compatible on some level with scientific knowledge. This belief is based on faith. Far more scientific knowledge exists than I can comprehend in depth; therefore, my belief in science must be faith based. Though most of us are taught science in school, few of us are taught the history of detailed reasoning and observation that led to establishing what is now considered scientific fact.

Those who interpret the Bible literally, must reject as false, much of what science teaches, if they are to be consistent in their beliefs. Few realize the implications of their rejection of science. They are protected from having to face the contradictions they create by rejecting science by their superficial understanding of science. Arthur C. Clark postulates that if technology is sufficiently advanced, than it can’t be distinguished from magic. I think we’ve achieved that level of technological advancement.

Science was far more comprehensible in Darwin’s day than it is today. Some churchmen readily incorporated evolution into their religious thinking during Darwin’s time, just as some do today. However, if Clark is correct, advancing technology must be accompanied by a decreasing comprehension of how things work. When everything exists as magic, than dependence on reason and observation must decline. The tools of reason and observation have well served mankind. Once they are lost, only magic will remain.
Posted by Dave Loeff at 2:49 PM No comments:

The Spiritual Benefits of Recession. 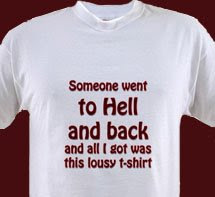 Are there spiritual lessons to be gleaned from the economy’s rapid ride into Hell? I believe there are.

The first lesson is moderation. Lenders and borrowers both took excessive risks. When something looks too good to be true, it probably is. But avarice makes us want to believe when we should doubt. That’s why con artists are able to cheat us. Isn’t avarice one of the seven deadly sins?
Another lesson is that we are all interconnected. Even though you paid your mortgage and kept your house, you’ll have to suffer along with those who defaulted on their mortgages. When cash is tight and the economy slows, the effect is felt everywhere. Someone sneezes on Wall Street and someone else in India loses his job. There’s no escaping the fact — we are one.
Posted by Dave Loeff at 6:27 PM No comments: