It's like the egg laying the chicken - or mixing metaphors - Ouroboros 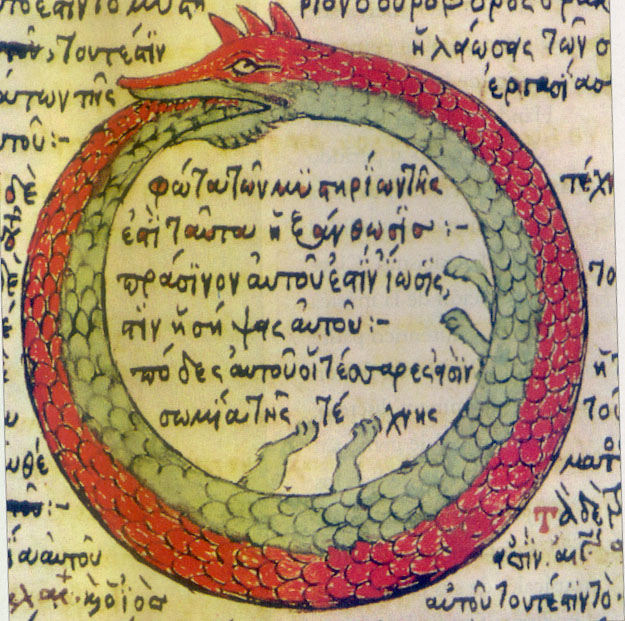 Beyond Biocentrism: Rethinking Time, Space, Consciousness, and the Illusion of Death

In their first book, Lanza and Berman presented Biocentrism, a view that accounts for some of the anomalies of physics. This book takes the argument further. The science is solid, but I question the validity of the authors’ conclusions.

The scientific argument begins with with a hard nut that physicists have tried to crack for nearly one hundred years. Things are not as they seem. The model of an atom one first encountered in elementary school is not realistic. In reality, electrons don’t cross atomic nucleuses in neat orbits. In reality, they’re everywhere at once. Electrons exist in a superposition of all possible locations until interfered with. As soon as a measurement is taken, the electron’s “wave function” collapses and it shows itself. Since observation is required to determine an electron’s position, the role of consciousness plays a key part in how the universe operates. Hence, life itself, steers the universe’s unfolding.

“What is not in doubt even in these early research stages is that the observer is correlative with the cosmos. That time does not exist. And perhaps the most cheerful takeaway from biocentrism: Since there’s no self-existing space-time matrix in which energy can dissipate, it’s impossible for you to ‘go’ anywhere.

In a nutshell, death is illusory. ... Consciousness and awareness never began, and will never end.”

And yet, when one sleeps can one be said to be conscious? For that matter, how can there be a “when” if time is illusory?

Backing up a bit, the authors note that logic and science are not the only methods of gaining knowledge. Intuitions arise from neither and are generally correct. Upon seeing a corpse, intuition tells us that the body’s former occupant has departed. But where did it go? Here’s the explanation:

“The feeling of “me,” of consciousness itself, could be considered a 23-watt energy cloud, which is the brain’s energy consumption in producing our sense of ‘being’ and its myriad sensory manifestations. Energy, as we learned in high school physics, is never lost. It can change form but it never dissipates or disappears. So what happens when those brain cells die?”

The answer is that death is an illusion. One can’t die because, “neither space nor time are real in any sense except as appearances or tools of the mind.”

In the first appendix we learn the difference between mind and brain. “The brain is a physical object occupying a specific location. It exists as a spatio-temporal construction ... .” Other objects like tables must also be constructions, yet you can’t crowd those constructions into brains. Paradoxical. Space isn’t real, but you still have to watch where you place things. Luckily we don’t have to worry about where one places one’s mind. “But the mind has no location. It is everywhere you observe, smell, or hear anything.”

I can’t quite wrap my own mind around this. Maybe with more explanation. The authors are releasing another book in November. I can barely wait.