Is there an artful approach to artificial intelligence? 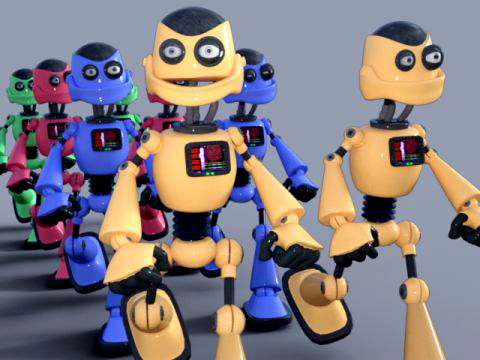 During the week concluding 2017’s first half, three New York Times stories addressed the potential social dangers of Artificial Intelligence. Is this a mere coincidence, or is it rather a symptom of growing alarm? Previously economists have noted that just as industrialization eliminated many jobs only to create new ones, automation has done the same. But some economists now suspect that this time it will be different.

Kai-Fu Lee penned the most thoughtful of the week’s three stories. He notes, “Unlike the Industrial Revolution and the computer revolution, the A.I. revolution is not taking certain jobs (artisans, personal assistants who use paper and typewriters) and replacing them with other jobs (assembly-line workers, personal assistants conversant with computers). Instead, it is poised to bring about a wide-scale decimation of jobs — mostly lower-paying jobs but some higher-paying ones, too.” These will include, “Bank tellers, customer service representatives, telemarketers, stock and bond traders, even paralegals and radiologists,” who will, “gradually be replaced by such software.” In time robots and self driving vehicles will replace a slew of other jobs.

Lee notes that A.I. software is being developed faster than most people realize and that it has the potential to disrupt society in two ways. He asks; “we are thus facing two developments that do not sit easily together: enormous wealth concentrated in relatively few hands and enormous numbers of people out of work. What is to be done?”

Some who have pondered this question believe that education is the key to creating jobs in this soon-to-come economy. But Lee believes education is only a partial solution. “Artificial intelligence is poorly suited for jobs involving creativity, planning and “cross-domain” thinking — for example, the work of a trial lawyer. But these skills are typically required by high-paying jobs that may be hard to retrain displaced workers to do.” Lower paying, people-skill, jobs can’t easily be performed by artificial intelligence but, “How many bartenders does a society really need?”

Lee, among others, suggests that in addition to educating workers, a universal income may also be required. To prevent massive unemployment, Lee believes that service jobs which today are poorly paid, or done by volunteers, will acquire greater status. Wealth held by A.I.’s landlords and other wealthy people and companies will need to be taxed to pay for the new, and newly remodeled, jobs necessitated by A.I.

This means higher taxes, a solution applied during the Great Depression of the thirties, World War II, and the Cold War. However, high taxation went away in the Reagan era and it shows no sign of returning soon. Although high progressive taxes brought about a period during which America had a broader and more prosperous middle class, that approach has been unpopular in recent years. Instead, tax cuts, particularly for the wealthy have been used under the theory that wealth would trickle down and benefit society at large. These tax cuts have given the economy a few short-lived bumps, but they’ve also increased the nation’s deficits. Today, the top 20 percent of Americans hold roughly 90 percent of the country’s wealth. Recently both the Congress and the Senate proposed tax plans that would leave more than 20 million Americans without health insurance. Though universal health care is the norm in most well-developed nations, it’s an idea that remains unpopular in the United States. Lee and others who propose universal income are unrealistic: if universal healthcare is too socialistic for the United States, then a universal income will meet the same resistance.

Before universal income, or something like it, can become a reality, America’s economic attitudes will need to change. The difficulty here is that those with the most money influence our political process in a variety of ways—and they seem set on preserving their wealth. Today many Americans face poverty and economic uncertainty. The growth of A.I. will soon put more money in fewer hands increasing the misery of the 80 percent of Americans currently sharing 10 percent of the wealth.

Lee writes from Beijing. Perhaps his solution will work in China. But unless something major changes here, it won’t work in the United States.

Lee makes a secondary point as well. China and the United States are the two countries most likely to advance advanced A.I. technology. As they do so other nations may be plunged into poverty. Lee concludes, “…we are going to have to start thinking about how to minimize the looming A.I.-fueled gap between the haves and the have-nots, both within and between nations. Or to put the matter more optimistically: A.I. is presenting us with an opportunity to rethink economic inequality on a global scale. These challenges are too far-ranging in their effects for any nation to isolate itself from the rest of the world.”

Posted by Dave Loeff at 7:16 PM No comments: