I tried to access Wikileaks but wasn’t able to. So, I Googled it. I soon learned that according to Peter Svensson’s AP article, Wikileaks claims to be inaccessible due to massive denial of service attacks. I also learned that the website was a dot.org instead of a dot.com. Armed with this knowledge, I had no trouble accessing its website. However, I can’t access all of it, or its more recent pages.

Perhaps Wikileaks is under cyberattack, or perhaps there’s another reason why it can’t be accessed. You can’t believe everything you read on the internet, hence the name of this blog.

Espionage writer, Eric Ambler, discusses what might happen if an obscure, right-wing, weekly newsletter were to begin publishing classified information. In his novel, “The Intercom Conspiracy,” Ambler treats the topic humorously. He could not have envisioned that something like this could happen in real-life, or the extent to which classified information would be leaked.

Some the diplomatic cables that Wikileaks shared with the world contain a good bit of humor, but not for those world leaders who are butts of the jokes. As Ronald Neumann said on NPR this morning, if a man tells his wife something unflattering about her mother, and she passes it on, than he will be very uncomfortable the next time he faces his mother-in-law.

Truth is a good thing, but trust is even better. How will America fare in a world that perceives its diplomats can’t be trusted?
Posted by Dave Loeff at 9:48 AM 1 comment:

Last night I learned on Coast to Coast AM that Yellowstone has been having earthquake swarms since December 26. Earthquakes are normal for the Yellowstone region and largely go unnoticed. Although a swarm of more than 250 quakes in several days is unusual, so far no one is panicking. Not that panicking would do any good. If Yellowstone blows, half of the country will be covered in ash three feet deep. Still, it’s something to ponder, 2012 enthusiasts.
Posted by Dave Loeff at 5:52 PM No comments:

When CEOs come a begging 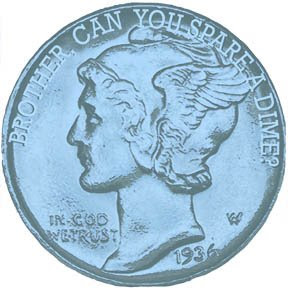 Bank CEOs got sloppy in their lending and it swamped their boat. So the government provided money for a bailout. They were expected to start lending again. Instead, they hoarded the money. But that’s not all they did. Bank CEOs bought other banks. They paid dividends. And they continued to draw their own excessive salaries.

Have they no shame? Had they taken salary cuts it would have demonstrated sincerity and contrition. But they continued to behave like it was business as usual. Did Nero fiddle while Rome burned? Damn right, he did. Does history repeat itself? No, why should it? Thankfully, they didn’t get all the money at once. Before they get the rest, they should be held accountable for how it gets spent.

When CEOs from the automotive sector came begging yesterday, Congress sent them home. “Come back when you have a plan,” it told them. Rightly so. After eight years of no bid contracts to privatize a war that wasn’t necessary, it’s about time that accountability came into fashion again. Tough financial decisions will soon need to be made. Let’s hope the government decides wisely.

—extrapolated from this mornings stories on NPR.
Posted by Dave Loeff at 7:55 AM No comments:

Jane MacLaren Walsh reports in the May, 2008 issue of Archaeology Magazine that purportedly ancient crystal skulls could not have been manufactured by Aztecs using the tools available during their era. Since the majority of crystal skulls were brought to light by one man, and since that man failed to provide details of their excavation, their ancient origin is questionable.
Nonetheless, popular belief in their mystical qualities fuels the current Indiana Jones adventure, “Kingdom of the Crystal Skulls”. Stephen Mehler appeared on Coast to Coast AM on May 22, 2008, that movie's opening day, to discuss the mystical qualities of crystal skulls. Apparently, like computers, they can store information. It makes perfect sense — both computers and crystal skulls contain silicone.
On a similar note, philosopher, Red Green once reasoned that he could build a computer by duct-taping a typewriter to an old television set. Hey, if that works for Red, I figure I can learn the secrets of Atlantis by staring into glass eyeballs.
Posted by Dave Loeff at 6:01 PM No comments:

Charles Fort, father of the supernatural

On May third, Coast to Coast AM host, Ian Punnett spoke with magic and special effects designer, Jim Steinmeyer about his new book. Steinmeyer, credits author, Charles Fort with drawing the public’s attention to ignored phenomena—phenomena damned by science and now considered supernatural.

I took a look at Ford’s book and this is what I found:

The book gets off to a slow start with a long skeptical description of what is, what isn’t and what not. The language is interesting; for example, “The little harlots will caper, and freaks will distract attention, and the clowns will break the rhythm of the whole with their buffooneries—but the solidity of the procession as a whole: the impressiveness of things that pass and pass and pass, and keep on and keep on and keep on coming.” But one wonders, what’s his point? Just where is this guy coming from? He finally tells us, “We are not realists. We are not idealists. We are intermediatists—that nothing is real, but that nothing is unreal: that all phenomena are approximations one way or the other between realness and unrealness.”

Yeah, okay, so where is he taking us? To the land of unexplained things, it seems. He begins by describing effects of the Krakatoa eruption which were observed prior to the event. He then describes all sorts of strange things that fell from the sky, including manna. He describes them for pages upon pages. More interesting than falling frogs or fish are the meteorites examined by Dr. Hahn, who “found fossils in specified meteorites: also he published photographs of them. His book is in the New York Public Library. In the reproductions every feature of some of the little shells is plainly marked. If they're not shells, neither are things under an oyster-counter.”

Other things turn up in places where they shouldn’t, like iron nails embedded in quartz, or metal cubes found in coal lumps.

All in all, Ford’s book is an ambitious catalog of unexplainable oddities. Yet his commentary is even odder, “It may be that the Milky Way is a composition of stiff, frozen, finally-static, absolute angels. We shall have data of little Milky Ways, moving swiftly; or data of hosts of angels, not absolute, or still dynamic. I suspect, myself, that the fixed stars are really fixed, and that the minute motions said to have been detected in them are illusions. I think that the fixed stars are absolutes.”

Ford’s, “The Book of the Damned” has been re-printed recently. But it’s also in the public domain and you can download it.

Posted by Dave Loeff at 8:12 PM No comments: