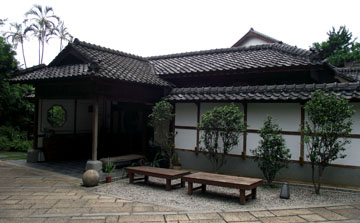 The Taiwan Folk Arts Museum was once the Koyama Hotel and Hot Spring. It also served as a Japanese officer’s club during the Second World War. Today the building and grounds have been restored to pristine condition and serve as beautiful examples of early twentieth century Japanese architecture.

The attractive two story structure hosts revolving folk art themed exhibits. We viewed a collection of embroidered baby carriers from southwest China. The mothers who made these carriers believed that the carriers took on aspects of her child’s spirit through long use. After the babies had outgrown them, mothers kept the carriers to remind themselves of the babies they’d raised. As treasured heirlooms, these carriers were rarely sold, but if sold, the ornamentation was generally removed prior to the sale. The fancy embroidery and trim was intact on the rare carriers displayed in this exhibit. 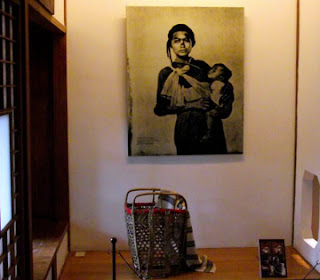 The Taiwan Folk Arts Museum is located at 32 Youya Road, in Taipei’s Beitou District. The 230 bus can take you there from either the Beitou or Xinbetou MRT stations. Their phone number is 2891-2318.

Other attractions within walking distance include: the eerie view at Hell (or Thermal) Valley, the historic Beitou Hot Springs Museum, and public bathing at Millennium Hot Spring.
Posted by Dave Loeff at 4:00 PM No comments: 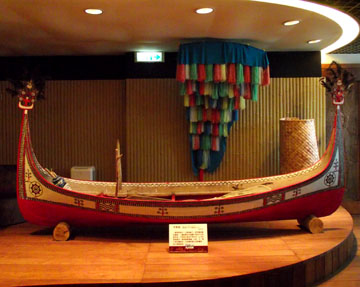 Taiwan’s indigenous people are the descendents of early residents of Fukien China who crossed the Taiwan Strait six thousand years ago. The Keelung Indigenous Cultural Hall is a modest, yet cheerfully sunlit building located near the bridge to Heping Dao (Peace Island).

The museum displays examples of aboriginal buildings, clothing, art and artifacts. The top floor leads out on to a plaza featuring additional carved artwork, a suspension bridge, paths, and a fine view of the Pacific Ocean.

Posted by Dave Loeff at 3:30 PM No comments: