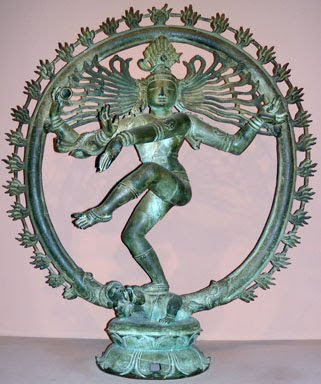 This bronze Shiva, in the Denver Art Museum, had its origins in India in the 1100s during the Chola Dynasty. It depicts the god in his aspect of Nataraj or “Lord of Dance.” This representation of Shiva can be interpreted in several ways. According to one interpretation, Shiva is dancing the destruction of the universe. As his movements quicken, fire and earthquakes consume creation. The god Brahma then awakens and recreates the universe. Another interpretation is that Shiva dances to release men from illusion. Shiva’s right foot, planted in victory on a figure symbolizing human ignorance, represents his embodiment. His left foot, held aloft, represents release. His raised right hand holds a drum, which represents creation. His other right hand is held in a gesture meaning, “be not fearful.” One of his left hands holds fire, representing destruction. All activity within the universe—every birth, every death—originates from Shiva, and is signified by the arch of flames, which surrounds him. The lotus base represents the creative forces within the universe. Shiva dances to free men from illusion. The dance takes place at the center of the universe, which is also located within the human heart. References: Denver Art Museum exhibit notes "Nataraja." In the Encyclopædia Britannica 2006 Ultimate Reference Suite DVD 21. Encyclopædia Britannica, 2006. Subhamoy Das. Nataraj: The Dancing Shiva. About.com, http://hinduism.about.com/od/lordshiva/p/nataraj.htm (accessed August 22, 2009)
Posted by Dave Loeff at 8:00 AM 1 comment: 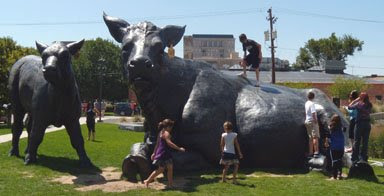 I really take offense with people who say that Denver is just an overgrown cow town. Take for example, Dan Ostermiller’s sculpture outside the Denver Art Museum. It's pure culture—on par with the kind you'd find in some other stuck-up, over-blown, namby-pamby, big city. There are no overgrown cows in my mile-high city--just art, thank you. So there, you big apple, you.
Posted by Dave Loeff at 6:02 PM No comments: