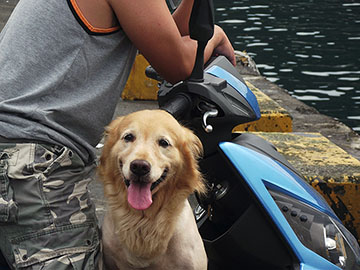 While vacationing this summer in Keelung, Taiwan, I learned that dogs could be taught new tricks.

For example, dogs can ride scooters. I saw one such rider on the pier at Bisha Fishing Port during the Dragon Boat races. The dog showed no inclination to steer, merely to ride.

Another cool trick is to let five dogs out on the hot roof of an industrial strength metal building. The dogs walk the roof’s periphery, barking at everything in sight, until they weary of the sport and one-by-one go back inside. 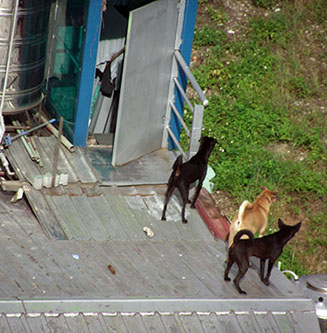 If nothing’s changed since I witnessed this amazing trick, the dogs can be viewed from an observation deck at Keelung Indigenous Cultural Hall.
As we picnicked at Lover’s Lake, one friendly canine befriended us. Soon he was enjoying morsels of barbecued sausages and pork. Not only was he our new friend, he protected us, too. Every time another dog approached, he growled, as if to say, “these people belong to me. Stay away.” Later, when all the meat had been cooked and eaten, he stopped growling at other dogs and played nicely instead. Apparently the trick was on us. He wasn’t a true friend. He was only interested in our food.
Posted by Dave Loeff at 5:09 PM