Doing the DNC. Taking it to the streets.

I checked out the delays and detours before I caught my bus. But, the guy next to me apparently didn’t. When we approached Colfax and Federal, encountered the road work detour signs, and went south, he began to complain. “There’s no way in hell, you’ll get across I-25 going this way, what the * are you doing?” he yelled at the driver. Then he changed his target, “If this guy expects us to vote for him, he can kiss my *.” He looked like an aging hippy—graying, long hair tied in a pony, earring, tattoo—all that stuff. But, there’s no telling, anymore, what a guy’s politics are just by looking at his demeanor.

I got downtown, did a lot of walking—but, hey, let the pictures tell the story 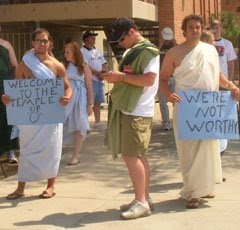 Over by the college, I came across some guys from the, "Temple of O," who were dressed up like the toga party in "Animal House". I can't guess their motive, but I have to agree—they are not worthy. 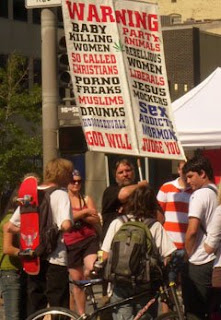 have a lot to say about a lot of other people who are going to Hell. 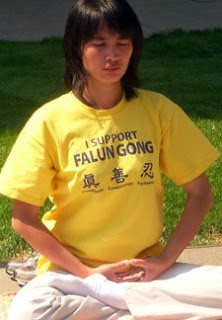 She's not saying anything. Is she just sitting around, or is there something more going on?
Posted by Dave Loeff at 6:59 PM

Email ThisBlogThis!Share to TwitterShare to FacebookShare to Pinterest
Labels: places